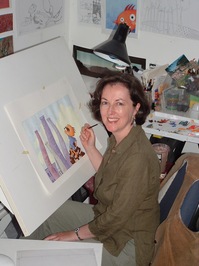 Marie-Louise Fitzpatrick is a multi-award winning author and illustrator, who was born in Dublin, but now lives in Greystones, County Wicklow with her husband and fellow author/illustrator, Michael Emberley.

From the age of four Marie-Louise Fitzpatrick wanted to be an artist, and since then she has never looked back. She studied graphic design in college, and quickly began to focus on the area of children's illustrations. While working as a graphic design assistant, an illustrator of love stories for a women's magazine, a part-time teacher, and an illustrator of text-books (not all at one time), Marie-Louise created her first three picture books An Chanáil, The Sleeping Giant, and The Long March. Her fourth picture book, Izzy and Skunk, was published with Gullane Children's Books in 2000 after numerous rejection slips from London over five years, and several revisions of the ending and the illustrations. Since then, it has been published in many different languages including Chinese, Korean and Danish, and it won the Bisto Book of the Year in 2000. It was at this point that Marie-Louise decided it was time to take a leap of faith and to concentrate solely on writing and illustrating and she created many more picture books including I'm a Tiger Too, You Me and the Great Blue Sea, I am I and Silly Mommy, Silly Daddy. More recently, she has branched into writing novels for older children, which she likes to write in local cafes, and she has written three to date. Dark Warning was recently selected for the 2013 CBI Book of the Year Honour Award for Fiction.

Marie-Louise Fitzpatrick has quite an affiliation with Frostburg State University, as she met her partner, and now husband, there, when both she and Michael Emberley were invited to present at the 2007 Spring Festival of Children's Literature. Michael, from Massachusetts, is part of a children's literature family as both his dad and his sister are authors and illustrators of picture books.

Marie-Louise has a compulsive love for traveling and frequently indulges this love by visiting places as part of her research, or to speak at literary conferences around the globe. Some of the places she has traveled to, as part of her research, include Oklahoma, Spain, Australia and London. Fitzpatrick is also a history lover which is evident in many of her works such as The Long March, The Sleeping Giant, Timecatcher, Dark Warning, and Hagwitch. This interest stems from her grandmother's influence. She loves studying and immersing herself in the era she is writing about as part of her preparations, and spends a great deal of time doing it. Although she saturates herself in the time period, however, her books do not become history lessons. The details to describe settings and characters are so minute and appropriate that they almost fall right between the lines of the story.

Marie-Louise Fitzpatrick now has twelve picture books and three novels published, and most have been published around the world in various co-editions. We can look forward to a new picture book entitled The New Kid by Marie-Louise in 2014 and she is now working on a new novel.
Powered by